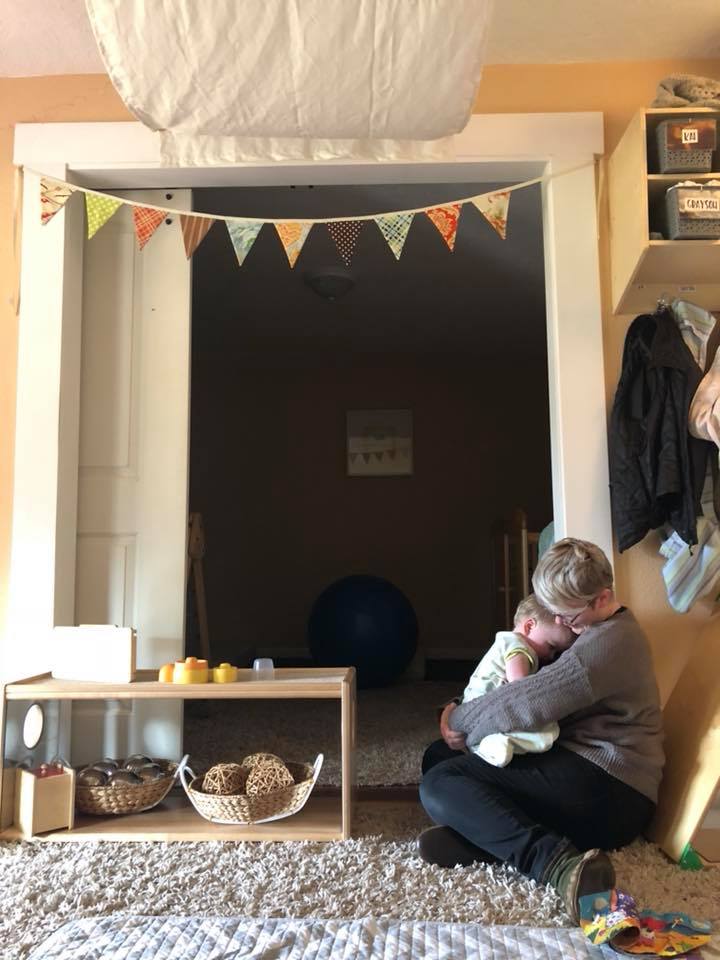 All staff at The Nest have:

All staff are required to complete a minimum of 24 hours of training annually in a variety of Oregon’s core knowledge categories, but we are passionate about continued learning, and usually far exceed that number.

Savannah (she/her) is a teacher in odd-numbered cohorts, as well as the owner and manager here at The Nest. She has worked with young children most of her life, including two years at Busy Bee Preschool and several years as a nanny for infants and toddlers. She felt a strong kinship with Magda Gerber’s ideas the first time she read Dear Parent, and did an extensive RIE training in the fall of 2013.

She lives here in SE Portland with a dopey old beagle and a sweet monster mutt. In her spare time she likes to cook, sew, tend to an absurd number of house plants, and read preschool teaching blogs and YA dystopian fiction.

Savannah grew up in a small town here in Oregon and graduated from Reed College with a degree in English, before realizing that she really wanted to spend her life working with young children. Her favorite book in middle school was Baby Island by Carol Ryrie Brink, in which two girls get happily stranded on a desert island with four toddlers, so she probably should have known all along!

Alex (she/her) is a teacher in odd-numbered cohorts. She has been teaching in the Early Childhood Education setting since 2012, and also has experience as a Preschool Director in the Portland area. She believes that having experience both in the classroom and in management has given her an appreciation and understanding toward what makes a school happy, healthy, and “homey.”

A background in Psychology and Counseling is what helped feed Alex’s passion for working with children. Kiddos go through so many different mental and physical developmental stages in their first few years of life, and watching that unfold (differently, yet similarly) for each child in her care is something that she genuinely cherishes.

Alex was born and raised here in Oregon, primarily living in the suburbs of Portland her entire life (and enjoying every minute of it). Aside from working with children, Alex holds a deep love for scary movies, fiction novels, and 80’s rock bands.

Emily (she/her) is a teacher in odd-numbered cohorts. She is a native Portlander, dog lover, and a huge Blazer fan! She lives in NE Portland with her husband Zo and their cat and wiener dog. She loves to garden and read, and she tends our school gardens (and hummingbirds!). Her favorite books are The Song of Ice and Fire series (aka Game of Thrones) by George R.R. Martin.

Em has been working in the field, with infants and toddlers, for more than 10 years, and has been at The Nest since 2014. She studied Early Childhood Education and Family Studies at Portland Community College and earned her Certificate there.

Her education and approach to caregiving is based on Magda Gerber’s RIE philosophy. She believes in building trust, forming relationships, healthy attachment, and respecting every child as an individual.

Louise (she/her) is a teacher in odd-numbered cohorts. Born and raised in North Wales, Louise has dedicated her life to working with children and families.

Louise lives in SE Portland with her husband Jeff and her cat Misty. Never bored, she brings joy to her days through her many hobbies, some of which include crocheting, cooking, CriCuting, exploring new worlds through reading, and tending to her plot in her community garden – just to name a few!

Louise has been working in the field for more than 30 years and has always been passionate in expanding her knowledge. This love of learning has led her down many paths, from traveling around the globe as the nanny for 90s rock n’ roll legends R.E.M., to training as a postpartum doula.

Introduced to Montessori 20 years ago, Louise became a Guide to infants and toddlers. She is also trained in infant massage and RIE and brings this experience, along with her values of empathy and respect, to work with her every day at The Nest.

Dea (she/they) is the lead teacher in even-numbered cohorts. Dea has been working with children and families since 2011. Dea graduated in 2016 from Southern Oregon University with a bachelors in early childhood development. Throughout college Dea focused on infant and toddler development.

Dea believes in the power of relationships, respect and natural consequences when working with young children. When not raising the next generation Dea is usually found knitting, cuddling with their dog Dozer or eating too much granola.

Veronica (she/her) is a teacher in even-numbered cohorts and discovered her love for early childhood education just out of high school. After working at a preschool for several months, she was given the opportunity to apply to The Nest in June of 2017 and instantly fell in love with all things baby, toddler, and RIE. She learned from the best (aka Savannah and the other teachers) and believes in using gentle but firm boundaries to give kids the structure to succeed and the freedom to explore.

Her favorite part of the job is witnessing the intense change and growth the youngest humans go through in their time here and loving them through it all. She also believes mental health is key when it comes to raising children, and it is vital as a caregiver to understand your own mental health so that you can be prepared to give children the support they need with their own turbulent emotions.

When not raising littles, Veronica can be found crocheting, doing yoga, singing along to music of all genres and tending to her houseplants.

Lauren (she/her) is a teacher in even-numbered cohorts. She is working toward her degree in early childhood education, and is particularly interested in infant and toddler development. She believes that young children learn best in an environment with positive relationships and lots of opportunities for kids to challenge themselves and learn new things.

Lauren was born in California and has lived in Portland since elementary school. When she is not working with children, Lauren enjoys reading, playing guitar and piano, listening to music and podcasts, and hanging out with her cat, Oskey.

Lonnie (they/them) is a teacher in even-numbered cohorts, and an all-school sub. They have been working with young children for four years, primarily within the context of summer camps. They also graduated with a degree in psychology from Reed College where they were particularly interested in the relationship between a person’s individual disposition and outside socializing forces. Lonnie is a firm believer that all children are able to thrive when their strengths are centered, their autonomy is respected, and their ability to achieve is expected.

While they were born and raised in a suburb just outside of Seattle, Lonnie now lives in SE Portland with two fabulous housemates who they spend lots of time with. Additionally, they can oftentimes be found sitting on their stoop drinking coffee and reading (their favorite author, Willy Vlautin, lives in Oregon), dancing to anything from disco to punk, and reflecting on their own childhood experiences. Lonnie plans to forever maintain their appreciation of the quiet moments in life (despite being an extrovert with a loud voice) and the power of authenticity.